Now is your chance to tell us how we’re doing!

It’s Customer Satisfaction Survey Season at the Huntingdon Valley Library.  Based on last year’s survey, we are happy to announce that Sunday Hours are coming in 2016 (maybe as early as late January).

Please take a few minutes to share your thoughts with us:

Feedback is shared with the Board of Trustees and ensures we provide the services, collection and programs you expect.

Thank you for your time and feedback.

Thank you. Your support allows us to write the Next Chapter of the Library’s story.

Through the generosity of a bequest and two individual donations, the Library Board of Trustees started an Endowment Fund this year. To ensure future success and expanded services, we ask for your help to grow our new Endowment Fund. The Fund will provide:

Reading, literacy and lifelong learning are at the core of our mission. Add your contribution and join those who have helped support that mission and improve the Library and Community:

With gratitude and thanks,

A copy of the 2014 Appeal Letter is available to download
Does your employer offer a Matching Gifts program?  We will work with you to take advantage of the program.

The Huntingdon Valley Library is a 501(c)(3) nonprofit, tax-exempt organization. A copy of the registration and financial information may be obtained from the Pennsylvania Department of State by calling, toll-free, within Pennsylvania, 1-800-732-0999. Registration does not imply endorsement.

Huntingdon Valley Library presents the “Taste of Italy” Wine and Dine Fundraiser on:

Buy your ticket online today or stop by the Library with cash or a check, payable to “Huntingdon Valley Library”.

Cost: $50, includes food, wine and gratuity.
After the event, the Library will send attendees a letter with details about the tax-deductible portion of each donation.

All entrees are served with vegetables, the Library will supply a dessert and the Board of Trustees is providing all of the wine.

We will pair interesting Italian wines with each course and have information on the wines served.

Get your ticket today!

As members of the Library Board of Trustees work to craft a new Strategic Plan for the Library, they invite you to share your ideas, concerns and vision for library’s future at a Community Forum.  Your valuable input and feedback is vital to the planning process! We want to hear YOUR voice.

Please attend the final Community Forum on Saturday, October 25 at 10:30 am in the Community Room
Complementary bagels from Brooklyn Bagels 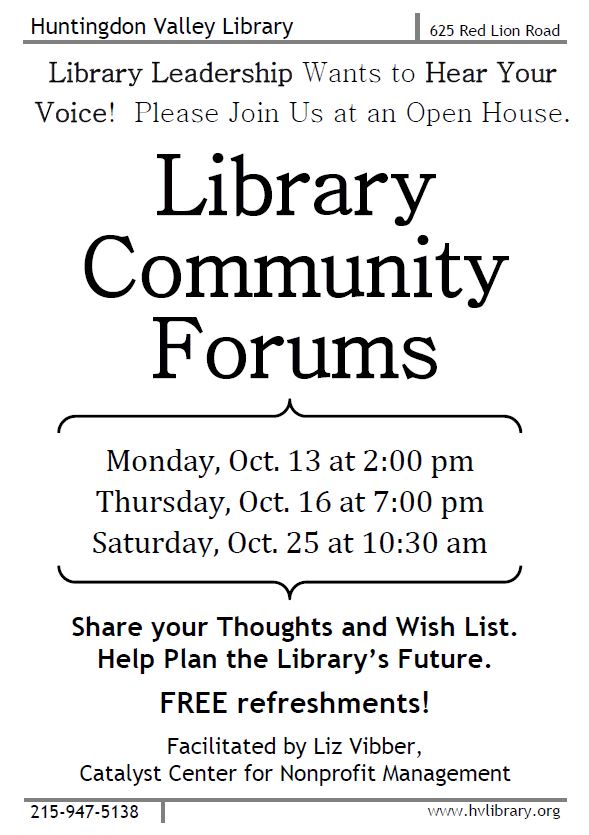 We truly want to listen and hear your opinions, whatever they are, about all aspects of Huntingdon Valley Library — the building, staff and/or programs and services.  How can we best serve you, your friends and families in the future?  Now is your chance to let us know and help build and even better library and community hub in years to come!” – Miryam Roddy, Board Secretary

This discussion, facilitated by Liz Vibber of Catalyst Center, will explore the themes and issues brought up in the Customer Survey and interviews with key stakeholders from the surrounding community.  Each forum will be approximately 1-hour long, with refreshments and chances to win door prizes!

We want to thank everyone who participated in the first two Forums, as well as the Teens who came and shared their creative ideas and insights.

The Survey is located here.

Thank you for your time and opinions.  The Board and Staff work in concert to provide the residents of the Lower Moreland Township and Huntingdon Valley Library users with great Library services.  Your feedback helps ensure we continue down the right path. If you run into any problems or would prefer to complete a paper survey, contact me at 215-947-5138 or by email at hvldirector@mclinc.org.

The Huntingdon Valley Library Board of Trustees invite you to share your thoughts with them through an online Customer Survey.

The Survey is located here.

As an incentive to share your time and opinions, you can enter to win a Samsung Galaxy Tab 3 Lite tablet computer by sharing your email address once you complete the survey.

Before crafting a new three-year Strategic Plan for the Library, the Board is gathering valuable input and feedback from the Community.

This Survey is one of several steps the Board is taking to listen to you!  They hope to hear the ideas and insights that will help shape and inform the Library’s future.

The Board is also engaged in interviewing Community members and they invite you to participate in one of three Community Forums in October.  These facilitated discussions will explore the themes and issues brought up through the Survey and interviews.

Please join the Board and Staff for the Community Forums that are most convenient for you:

Thank you for your time and opinions.  The Board and Staff work in concert to provide residents of the Lower Moreland Township and Huntingdon Valley Library users with great Library services.  Your feedback helps ensure we continue down the right path. If you run into any problems or would prefer to complete a paper survey, contact me at 215-947-5138 or by email at hvldirector@mclinc.org.

Did you know?  The Huntingdon Valley Library, a non-profit library, receives the majority of our funding from the Lower Moreland Township. This local support covers our basics: staff, utilities, insurance, and administrative expenses (like bookkeeping).

With individual donations from supporters like you and on-going support from the Friends of the Library, we are able to enhance the collection, improve our technology and bring in quality speakers, like Gerry Shur, Ruth K. Hartz and Dr. Isser.

Donations to the Library may be tax deductible.  We also welcome memorials and will provide a personalized book plate for any donation over $25.00.

For more information about how you can donate to the Library, visit the Donate page at hvlibrary.org.

We also have two new ways to support the Library:

To make your payment online, fill out the online donations form. Once that is submitted, use the button to make a payment. Be sure to specify your name and purpose so that we can match your form to your payment.

The Huntingdon Valley Library Board of Trustees Annual Meeting has been rescheduled to Thursday, February 27, 2014 at 7:00 p.m. in the 2nd Floor Community Room.  This meeting is open to the public.

Huntingdon Valley Library Board of Trustees Meeting
Annual Meeting of the Board
February 27, 2014

Help the Library celebrate over 60 years of service to Huntingdon Valley with Larry Kane, author of the new book When They Were Boys.

60th Anniversary Brunch
Sunday, January 5, 2014
11:30 am
Philmont Country Club
$25 per person, includes for each household, a complimentary copy of
When They Were Boys!

and assorted berries and coffee, decaf coffee and tea. We we also will have an Omelet bar.

Corporate sponsorship opportunities are available, please contact Sharon at the Library (215-947-5138 or hvldirector@mclinc.org) for more information.

The classic book by Ray Bradbury, Fahrenheit 451, was published, and also the equally bestselling, The Crucible, by Arthur Miller. The Huntingdon Valley Library opened its doors that same year, 1953.

To celebrate 60 years of service and to thank the community for its patronage and support, the Huntingdon Valley Library is having a special buffet brunch on January 5, 2014, from 11:30 am to 2:30 pm at the Philmont Country Club, 301 Tomlinson Rd, Huntingdon Valley, PA. “We are excited to celebrate both the Library and the Community in January and invite our friends and neighbors to join us,” said Sharon Moreland-Sender, Library Director.

Larry Kane will be the featured guest at the anniversary brunch. During his successful 52-year media career, Kane has covered domestic and world events. He is known as the “dean of Philadelphia television news anchors,” and is the only anchor to have worked at all three network-owned stations in the region. Currently, Kane is the host of the “Voice of Reason” on the Comcast Network, and also a special contributor with commentary and analysis for KYW Newsradio, as well as an occasional writer for The Philadelphia Inquirer.

2014 also marks the 50th anniversary of the Beatles’ American invasion. In 1964, Kane was a 21-year-old news director of Miami’s WFUN radio in 1964, when he became an embedded reporter on tour with the Beatles. He was the only American reporter to have traveled with the Beatles on every stop of their 1964 and 1965 American tours.

Kane wrote three books about his days with the iconic band: Ticket to Ride, and The New York Times bestseller Lennon Revealed. His third Beatles book came out earlier this summer — When They Were Boys: The True Story of the Beatles’ Rise to the Top (Running Press).

During the Huntingdon Valley Library brunch on January 5, Kane will speak about When They Were Boys. Brunch tickets are available for $25 a person and are available via the library’s website, http://www.hvlibrary.org or at the library. Every family or individual ticket holder will receive a free copy of When They Were Boys as the Library’s special thank you, and Kane will sign copies after his presentation. Seating is limited, so reserve one soon by calling the Library at 215-947-5138 or emailing us at hvldirector@mclinc.org.

A bit of our history:

The Huntingdon Valley Library dates back to 1871. It was located on Huntingdon Pike near the present Gulf Station. The second library was formed in 1919 by the Community Club. All the volumes were donated. The Community Club ran fund raising movies and minstrel shows to keep the library going. After a few years, due to the lack of funds and volunteers, the library closed.

In 1953, the Women’s Club of Huntingdon Valley started the third library as a community project. The collection consisted of donated books. Yerkes Cleaners cleared a shelf in their cleaning establishment to house the books. Soon the library’s growth necessitated a move to a rented house on Huntingdon Pike. The Women’s Club formed a Library Committee and staffed the library with volunteers. Residents in the area paid the rent.

In 1961, referendum was passed, and the library was incorporated as a non-profit organization with a Board of Trustees. Two years later; the library found a new home in the former Memorial Baptist Church where it stayed until an addition was built on the old Red Lion School site located across the street. The library moved into the new facility in April, 1995.

LUNCHEON AND CARDS
AT THE
HUNTINGDON VALLEY LIBRARY GOLF OUTING

Help us bring it ALL together